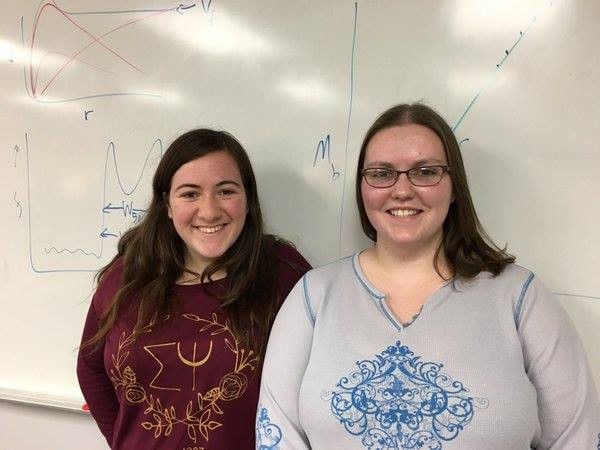 Grace Olivier has been working with Professor Heather Morrison on testing inside-out galaxy formation models locally in the Milky Way.  Using the SEGUE stripes, she has created maps of the colors of stars in the outer disk of the Milky Way. From these maps she has found the ages of stars by matching the colors to stellar evolution models, after adjusting for the chemical composition of stars in different parts of the Galaxy.  These maps of stellar ages in the outer disk of the Milky Way reveal much about the formation of the Milky Way’s disk and of substructure in the Galaxy such as the Monoceros Ring.

Elizabeth Tarantino is working with Professor Stacy McGaugh and Dr. Federico Lelli on the kinematics of galaxies. She studies rotation curves of these isolated galaxies to examine the distribution of mass in galaxies, including the elusive dark matter found in their halos. Elizabeth is comparing the observed kinematics of these galaxies to those in cosmological simulations in order to test different theories of dark matter.