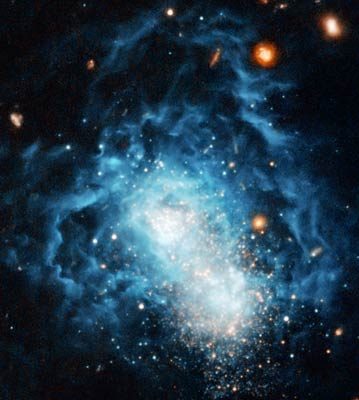 Jackie Monkiewicz (BS Astronomy and Physics CWRU 1998) has been awarded a prestigious NSF Astronomy and Astrophysics Fellowship to work on metal-poor dwarf galaxies. These galaxies are promising probes of ‘reionization’: the time in the early universe when the mostly neutral gas between galaxies was ionized by photons from  the first luminous sources.  “The laws astronomers use to understand star formation change below about one-tenth the metallicity of the Sun, and so the nearby dwarf galaxies which I plan to study may well be good analogs for the first galaxies whose UV photons ionized the universe”, says Monkiewicz.

Monkiewicz also plans to expand access to astronomy for blind and visually impaired audiences. She has already made a portable tactile planetarium, and will work on a smartphone app which will ‘sonify’ the astrophysical sky. When the smartphone is pointed at a position in the sky, it will make a sound corresponding to the wavelength of objects in this direction: either stars, galaxies, or interstellar gas. We congratulate Jackie on her achievements.
Previous
Next
Scroll To Top