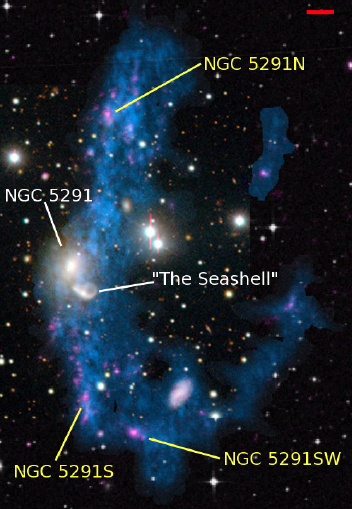 In a new paper published in the research journal Astronomy & Astrophysics, an international team of astronomers led by CWRU Astronomy postdoct Federico Lelli investigate the origin, structure, and dynamics of “tidal dwarf galaxies” (TDGs). TDGs are “recycled” low-mass galaxies that form during the interaction/merger of more massive spiral galaxies. According to the standard model of cosmology, TDGs should be the only galaxies in the Universe that are not surrounded by a dark matter halo, since they form exclusively out of baryonic material (gas and stars) ejected from the disks of the more massive progenitor galaxies. Lelli and collaborators used radio observations from the NRAO Very Large Array (Socorro, NM) to study the gas dynamics in these objects and found that they are regularly rotating. Using detailed dynamical models, they estimate the total mass of these systems and found that it is fully consistent with the visible mass (gas plus stars), implying that TDGs may well be devoid of dark matter. These results pose strong constrains on the distribution of dark matter in galaxies and on alternative theories like Modified Newtonian Dynamics.