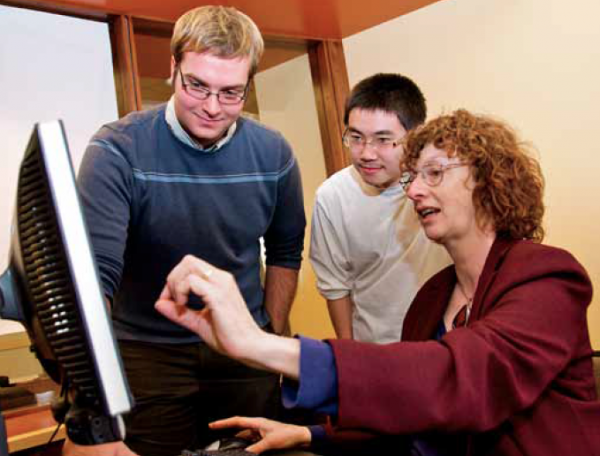 ASTR 101. Introduction to the Sun and Its Planets (3). This introductory astronomy course describes our solar system of planets and how astronomers develop our physical understanding about the universe. Topics include the properties of the Sun and planets; the formation of the solar system and how the planets have evolved over time; asteroids, comets, and dwarf planets; and a comparison of our solar system with new planetary systems being found around other stars. This course has no pre-requisites. (Formerly known as ASTR 201: The Sun and Its Planets. Not available for credit for astronomy majors.)

ASTR 103. Introduction to Stars, Galaxies and the Universe (3). This introductory astronomy course describes the universe we live in and how astronomers develop our physical understanding about it. Topics covered include: the properties of stars; the formation, evolution, and death of stars; white dwarfs, pulsars, and black holes; spiral and elliptical galaxies; the Big Bang and the expansion of the Universe. This course has no pre-requisites.  (Formerly known as ASTR 202: Stars, Galaxies, and the Universe. Not available for credit to astronomy majors.)

ASTR 105. Introduction to Einstein’s Universe (3). This course is a descriptive introduction for the non-science major to Einstein’s Special and General Theories of Relativity and how these theories have fundamentally altered our understanding of the universe. Topics discussed will include: time dilation, length contraction, the twin paradox, the warping of space-time, white dwarf stars, neutron stars, black holes, the structure and evolution of the universe. No mathematical background beyond simple algebra is needed. This course has no pre-requisites. (Formerly known as ASTR 204: Einstein’s Universe)

ASTR 151. Doing Astronomy (1). This course is intended to introduce students to how astronomy is done. The course will focus on the astronomical research process, including ongoing research activity in the department and on career paths in astronomy. This course is largely intended for first- and second-year students considering majoring or minoring in astronomy. Prereq: First- or second-year academic standing.

ASTR 221. Stars and Planets (3). Stellar structure and energy production. Formation and evolution of stars. Supernovae, neutron stars, and black holes. Star clusters. Planetary systems and the detection of extrasolar planets. The application of physical laws to the study of the universe. Prereq: MATH 122 or MATH 126 and PHYS 115 or PHYS 121 or PHYS 123.

ASTR 309. Astrophyics Seminar I (1). Selected topics in astronomy not covered ordinarily in courses. Presentation of talks by the students. Prerequisite: ASTR 222 or consent of instructor.

ASTR 310. Astrophysics Seminar II (1). Selected topics in astronomy not covered ordinarily in courses. Presentation of talks by the students. Prerequisite: ASTR 222 or consent of instructor.

ASTR 311. Stellar Physics (3). Radiative transfer, atomic and molecular opacities, and the observable properties of stars. Stellar interiors, nuclear processes, and energy generation. The evolution of stars of varying mass and production of the elements within supernovae explosions. Prerequisite: ASTR 222 or consent.

ASTR 328. Cosmology and the Structure of the Universe (3). Distances to galaxies. The content of the distant universe. Large scale structure and galaxy clusters. Physical cosmology. Structure and galaxy formation and evolution. Testing cosmological models. Offered as ASTR 328, PHYS 328, ASTR 428, and PHYS 428. Prereq: ASTR 222.

ASTR 351. Astronomy Capstone (1-3). A two semester course (1 hour in the Fall Semester and either 2 or 3 hours in the Spring Semester) for students desiring a Capstone Experience in astronomy. Students pursue a project based on experimental, theoretical or teaching research under the supervision of an astronomy faculty member. A departmental Capstone Project Committee must approve all project proposals (by the end of the Fall Semester) and this same committee will receive regular oral and written progress reports. Final results are presented at the end of the semester as a paper in a style suitable for publication in a professional journal as well as an oral report in a public symposium. Prereq: ASTR 222.

ASTR 369. Independent Research (1-9). Supervised research on topics of interest. Can be used as a thesis course if desired. Students may register more than once for a maximum of 9 credits overall (1-3 credits each semester).