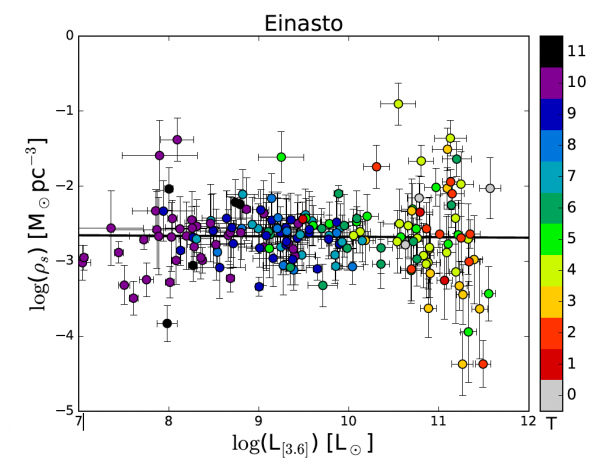 The constant characteristic density of dark matter halos for galaxies as a function of luminosity.

With the very large SPARC sample of 175 galaxies, Pengfei demonstrated the need for galaxies to be fit with “cored” dark matter halos rather than the cuspy halos predicted by dark matter only simulations. The cored halo profiles may be a sign of complex baryonic physics at play in the formation and evolution of galaxies, or evidence that current dark matter models are incomplete (full paper: Li+ 2020).

Interestingly, over the full range of galaxy luminosity covered by the SPARC database, the galaxies’ dark matter halos showed a constant characteristic density (see figure), and that both the scale radius and surface density of the halos correlate with galaxy luminosity. These scaling relations provide empirical benchmarks for studying galaxy formation scenarios in cosmological simulations (full paper: Li+ 2019).

The detailed rotation curve also demonstrated statistically the very low scatter in the radial acceleration relationship for galaxies, and showed the rotation curves were well-fit by a single value for the critical acceleration scale. The universality of the acceleration scale and the low scatter in the fits are difficult to explain under existing dark matter models, and motivate modified gravity models for solving the “missing mass” problem in galaxies (full paper: Li+ 2018).

Finally, Pengfei developed new techniques for studying how the baryonic matter in galaxies could strongly alter the density profiles of the dark matter halos, exacerbating jhe core-cusp problem in galaxies and complicating the mapping of rotation curve fits to the cosmological expectations for dark matter halos in the universe.