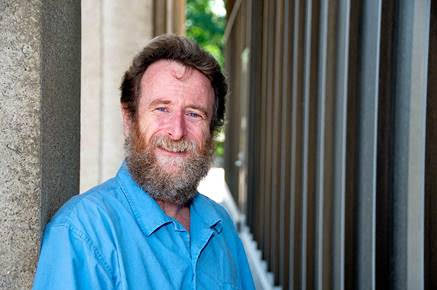 CWRU President Barbara Snyder has named Dr. Paul Harding a winner of a CWRU Presidential Award for Distinguished Service for his work with the university’s Burrell Schmidt telescope, and for his mentoring and support of students.

As Observatory Manager for the Burrell Schmidt, over the past two decades Paul Harding has transformed an aging observatory with limited scientific capabilities into one of the world-premiere astronomical facilities for studying nearby galaxies. When Paul joined CWRU in 2001, the 75 year old Burrell Schmidt, located on Kitt Peak in southwestern Arizona, was on the verge of obsolescence, in need of major upgrades in order to avoid being shuttered. In the years since, Paul has led a major overhaul of all systems of the observatory, including a redesign of the optical system, mechanical upgrades to telescope and drive systems, and the design, installation, and ongoing support of a new wide-field camera that makes the telescope competitive with major astronomical facilities world-wide. He has performed this work nearly single-handedly, often spending months at a time working solo atop Kitt Peak to perform the mechanical and scientific upgrades that were necessary for the observatory.

The upgraded observatory has had a major impact on the research capabilities and educational opportunities the university can provide. CWRU Astronomy faculty have won many significant funding awards from NASA, the NSF, and other outside research foundations based on their research with the telescope, awards which have in turn supported a wide variety of research opportunities for both graduate and undergraduate students at CWRU. The observatory’s scientific contributions have been noted far and wide. Faculty and student research has also been highlighted in a variety of media outlets — including the New York Times and Cleveland Plain Dealer – and CWRU researchers have been invited to talk about their work at universities and major international research conferences. CWRU students have leveraged these research opportunities to win graduate or postdoctoral research fellowships at universities both across the US and world-wide.

In addition to his work with our observatory facility, Paul also mentors student researchers and contributes to the educational mission of the Department of Astronomy. With his technical and scientific skills, he often works with students whose interest straddles both astronomy and engineering, and many of his students have gone on to careers which incorporate aspects of scientific research and technical observatory support. During his time here, the CWRU Astronomy program has become known not just for the scientific quality of its students but for their technical capabilities as well.

Harding is a world-renowned leader in astronomy and observatory science: he has published nearly 140 articles in scientific research  journals, has been named “Survey Architect” (the highest honor) for his work on the international Sloan Digital Sky Survey project, and is frequently asked by observatories across the globe to act as a technical consultant. His work at our observatory is tireless, careful, and responsible, and he does all this work while also contributing to the teaching and public outreach missions of the university. He works closely with students here at CWRU and at other universities, and has supervised individual research projects for a number of women students, a particularly important effort in bringing inclusion and diversity to STEM fields.

But beyond the specifics of his work, it is Paul’s unbounding enthusiasm while interacting with the broader CWRU community and general public that made him an ideal candidate for the President’s Service Award. Over the years he has given a number of public talks about astronomy and the CWRU observatory to audiences at the Cleveland Museum of Natural History and other venues throughout the region. When working at the observatory at Kitt Peak, interested tourists often drop by the telescope while visiting the mountain, and Paul never fails to take time out of his schedule to show them around the facility and tell them about the CWRU astronomy program. He has hosted organized visits to the observatory by CWRU alumni as well. And within the astronomy department, Paul is always stopping through the coffee room and joining in on conversations between faculty and students, helping to explain concepts for students struggling with coursework or providing encouragement and making important suggestions for students tackling tough research projects. It’s this unfailingly positive “everyone is welcome, everyone can help” attitude that makes Paul such an important and wonderful contributor to the CWRU learning community.