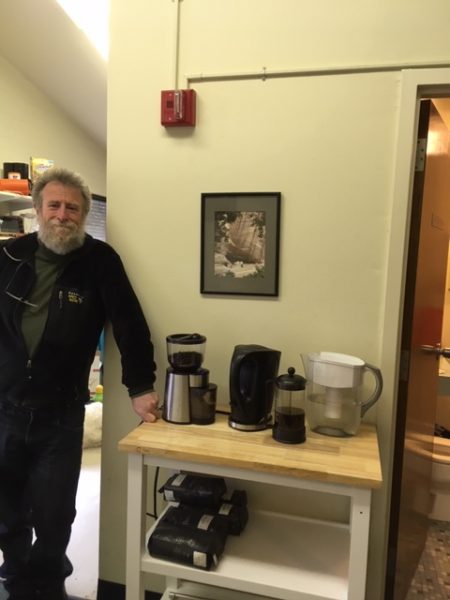 …unfortunately the rocky planet was Earth and the water ice came in the form of snowstorms at the observatory on Kitt Peak!

CWRU astronomers Paul Harding and Heather Morrison are currently at CWRU’s Burrell Schmidt in Arizona. The original plan for good weather was to continue studying the spiral galaxy M101 by taking deep exposures of the galaxy in the green light of oxygen emission lines, which would probe the chemical composition of the galaxy.

Unfortunately, the weather has not cooperated this run: Kitt Peak observatory is having the second snow storm this month. The first storm deposited two feet of snow on the mountain, which is at 7,000 feet, and broke five power poles. The second storm is relatively minor by comparison, but is delivering several more inches of wet snow and high winds.

While Harding and Morrison can’t observe M101 while the snow flies, the time at the observatory is still productive: the telescope and building are getting a good maintenance overhaul, and Paul has completed an upgrade to the declination drive to allow better guiding of the telescope. The upgrade also involved a good thorough cleaning of the teeth on the drive shaft, sort of like a visit to the dentist: all 320 teeth of the worm wheel were brushed and thoroughly flossed, then re-greased to prevent decay.

Who says that Cleveland is the only place to get nasty snowstorms in winter?
Previous
Next
Scroll To Top